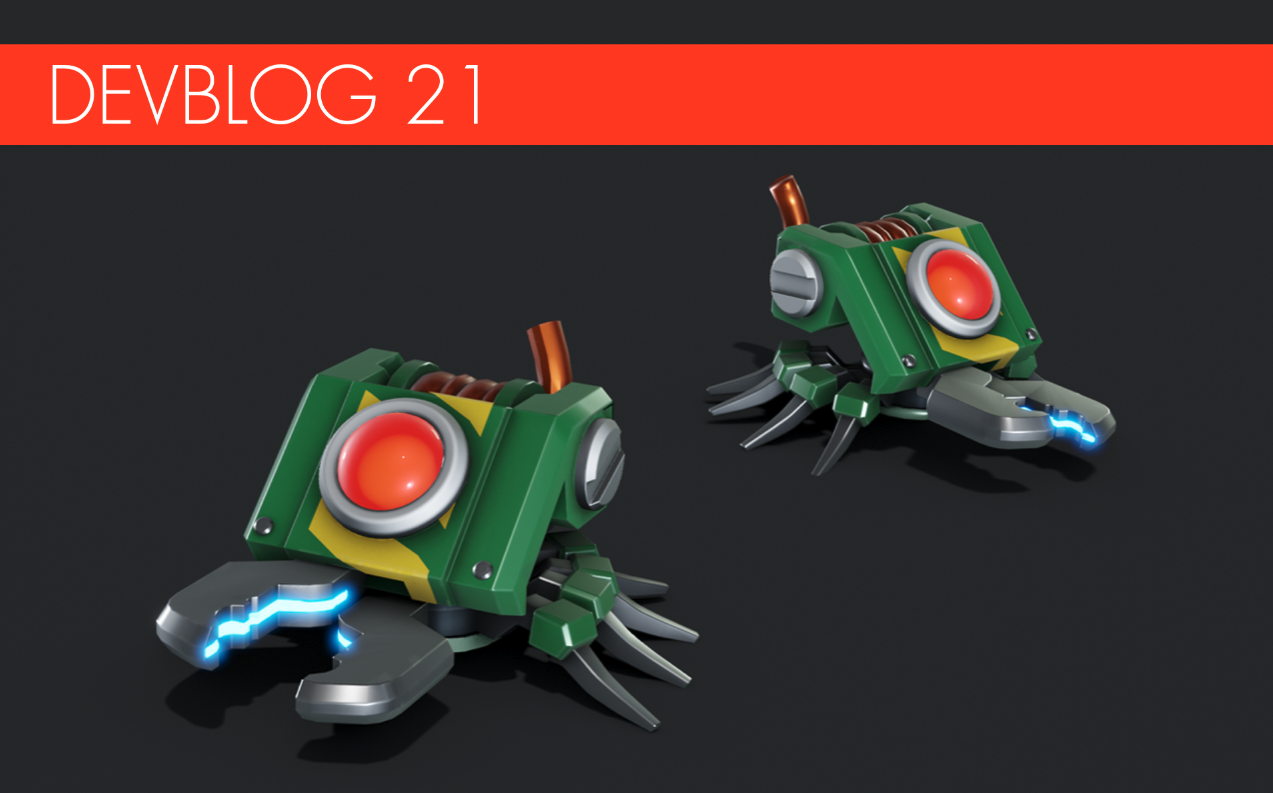 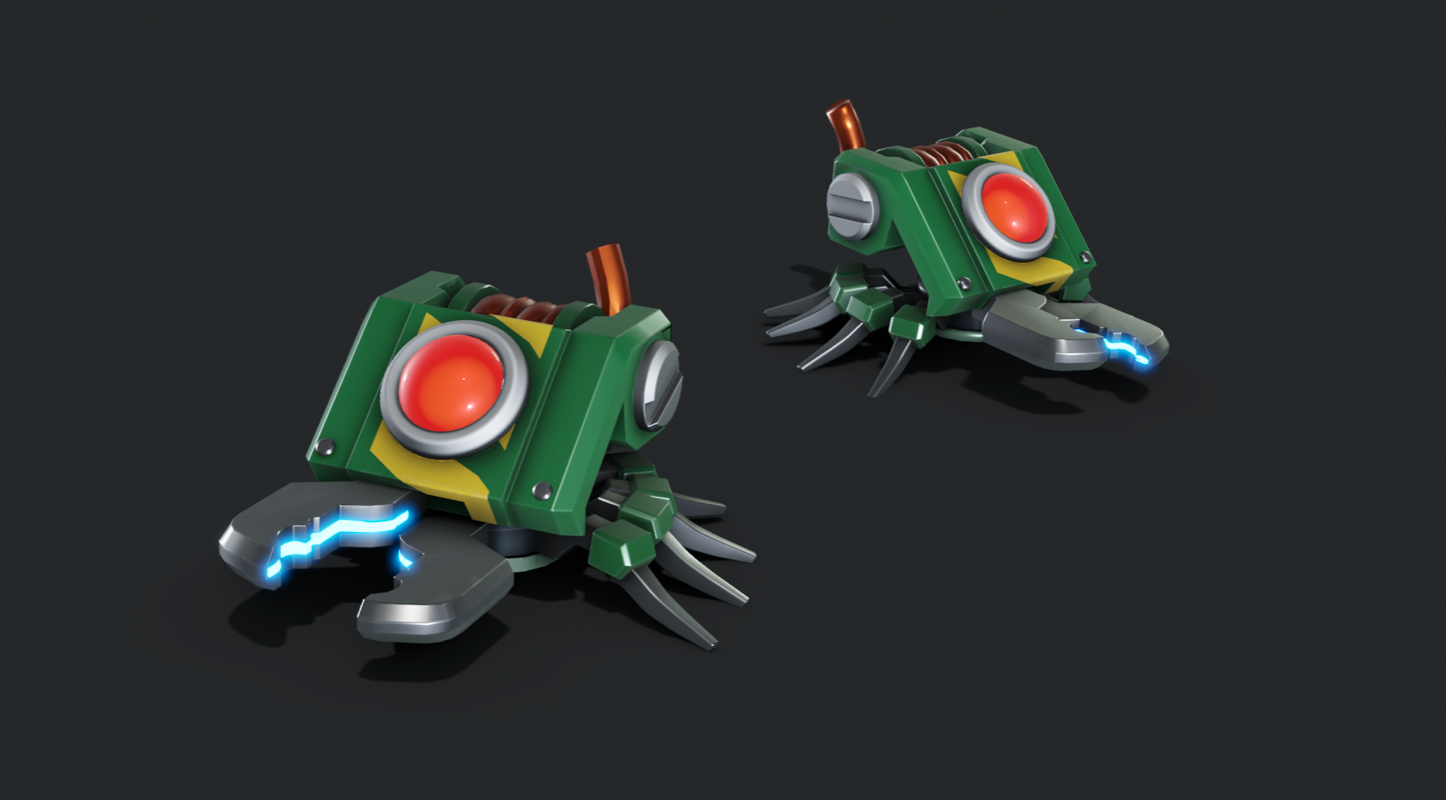 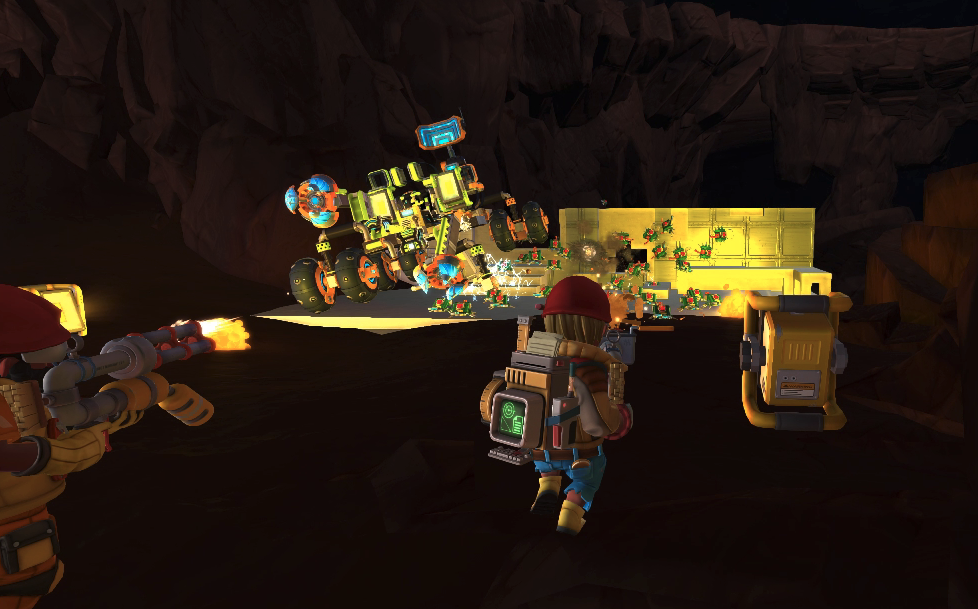 Watch out! There are more bots incoming in the next chapter: While traveling deep underground, you might encounter the cablebots: they travel in big numbers and love digging holes with their cable clippers. No one knows why the cablebots are that deep in the first place yet; perhaps you will find the answer to this mystery in a future update. Until then, you had best prep some chests with potatoes and dust off that spudgun; you're going to need it. 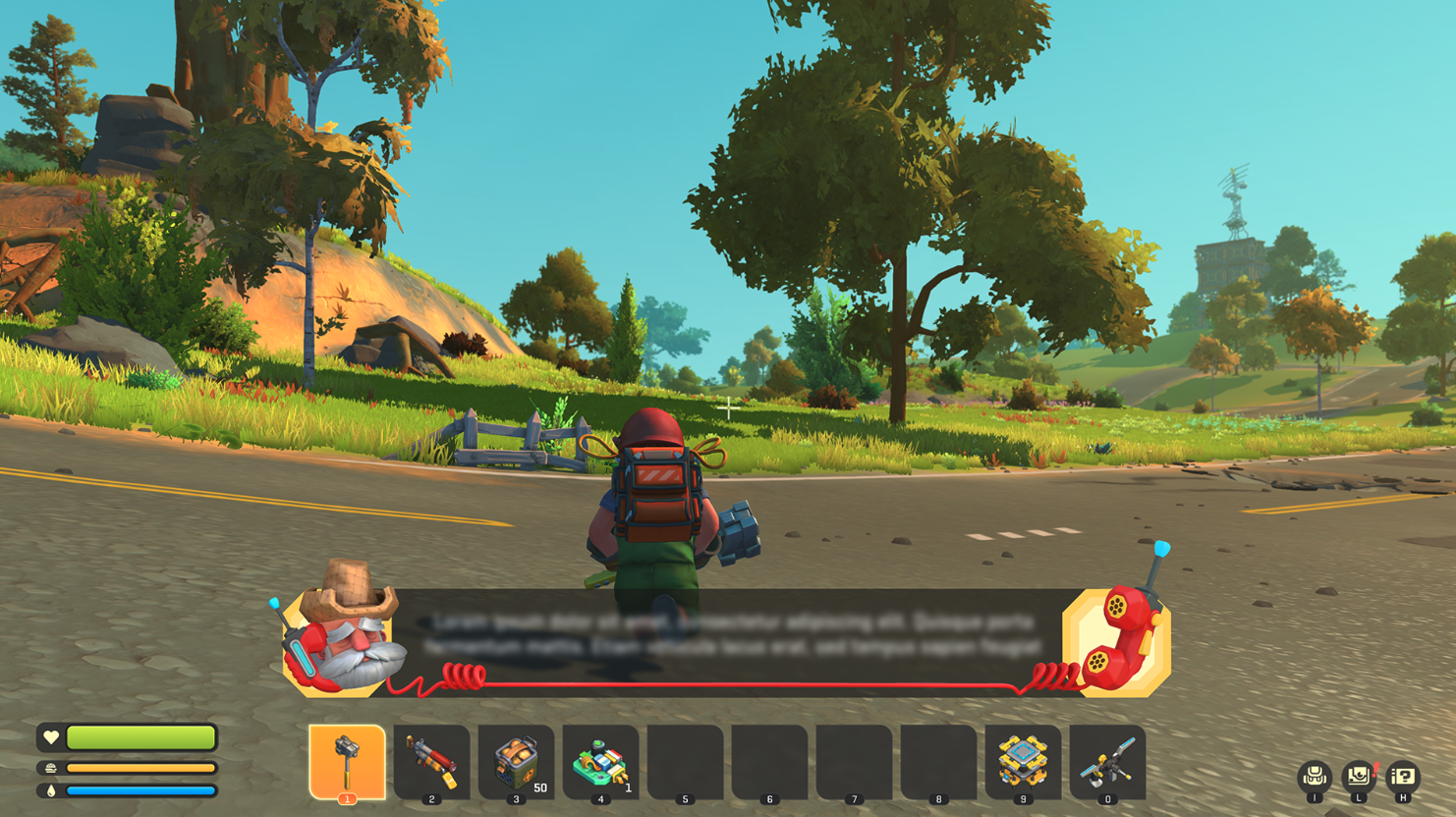 Progress on the new quest system for the next chapter is moving along. The quests in the chapter will guide you through the story while letting you continue playing at your own pace. We will also be adding a dialogue system to the game, letting NPCS talk to you! We love how it feels and where it's heading. Here is an image of the player taking an incoming call. 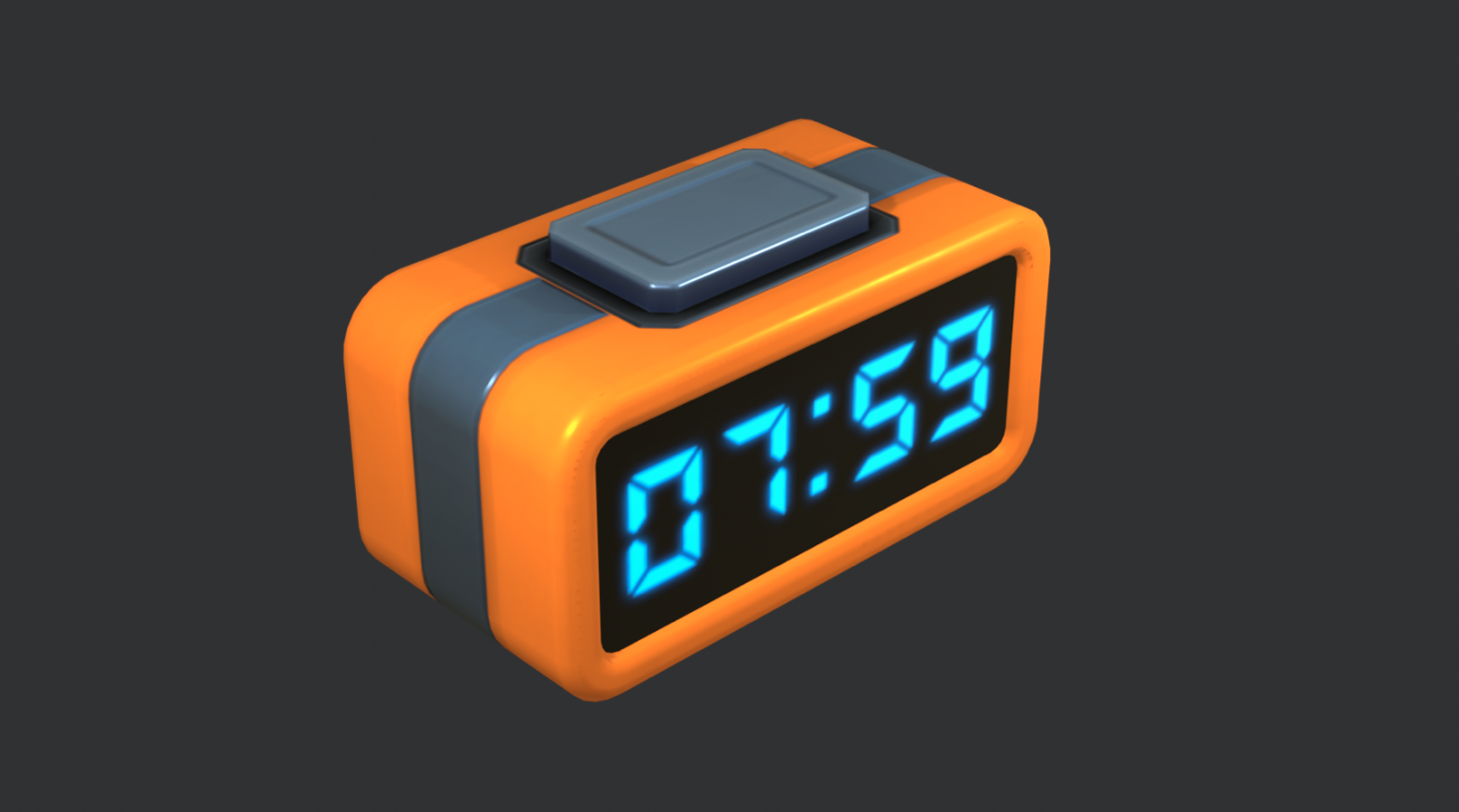 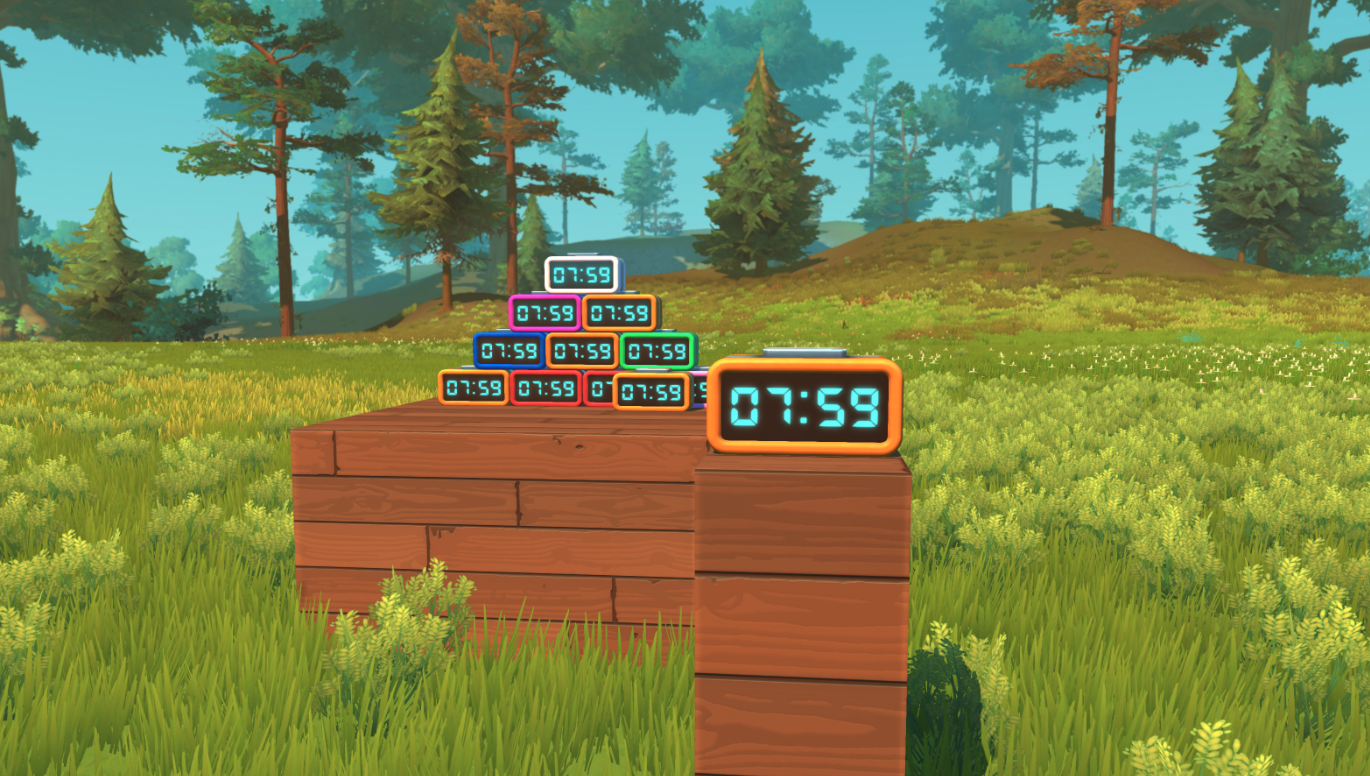 We have started work on a new interactive part. The next chapter will introduce a clock, so mechanics can check the time, anytime, whether they're driving or at their base. But that's not the best part about it: the clock will also allow the mechanic to set a specific time for it to interact with a trigger. Thanks to it, you should be able to set a time for your base defenses to turn on or off, so you can keep those uninvited nighttime visitors away! 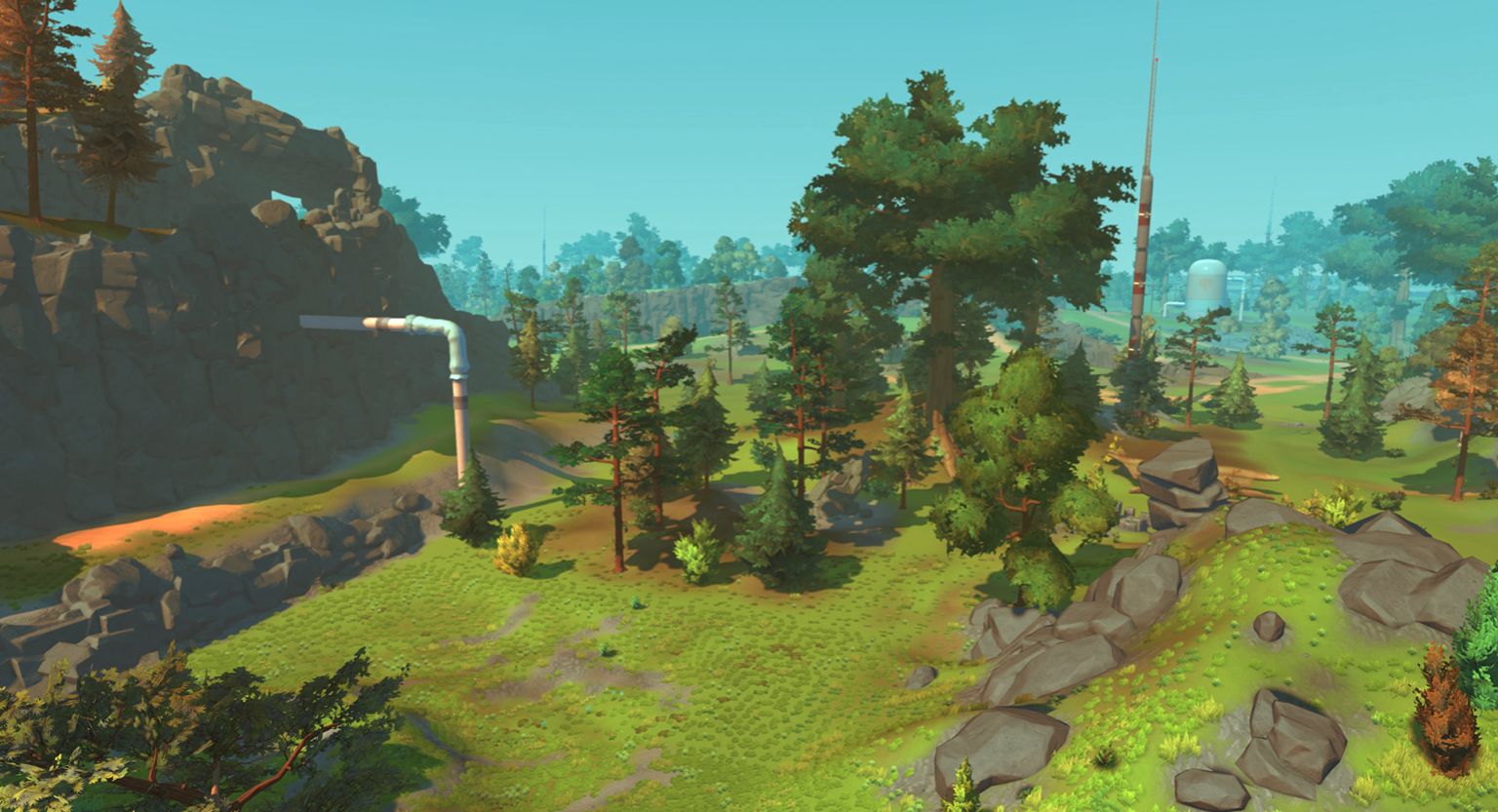 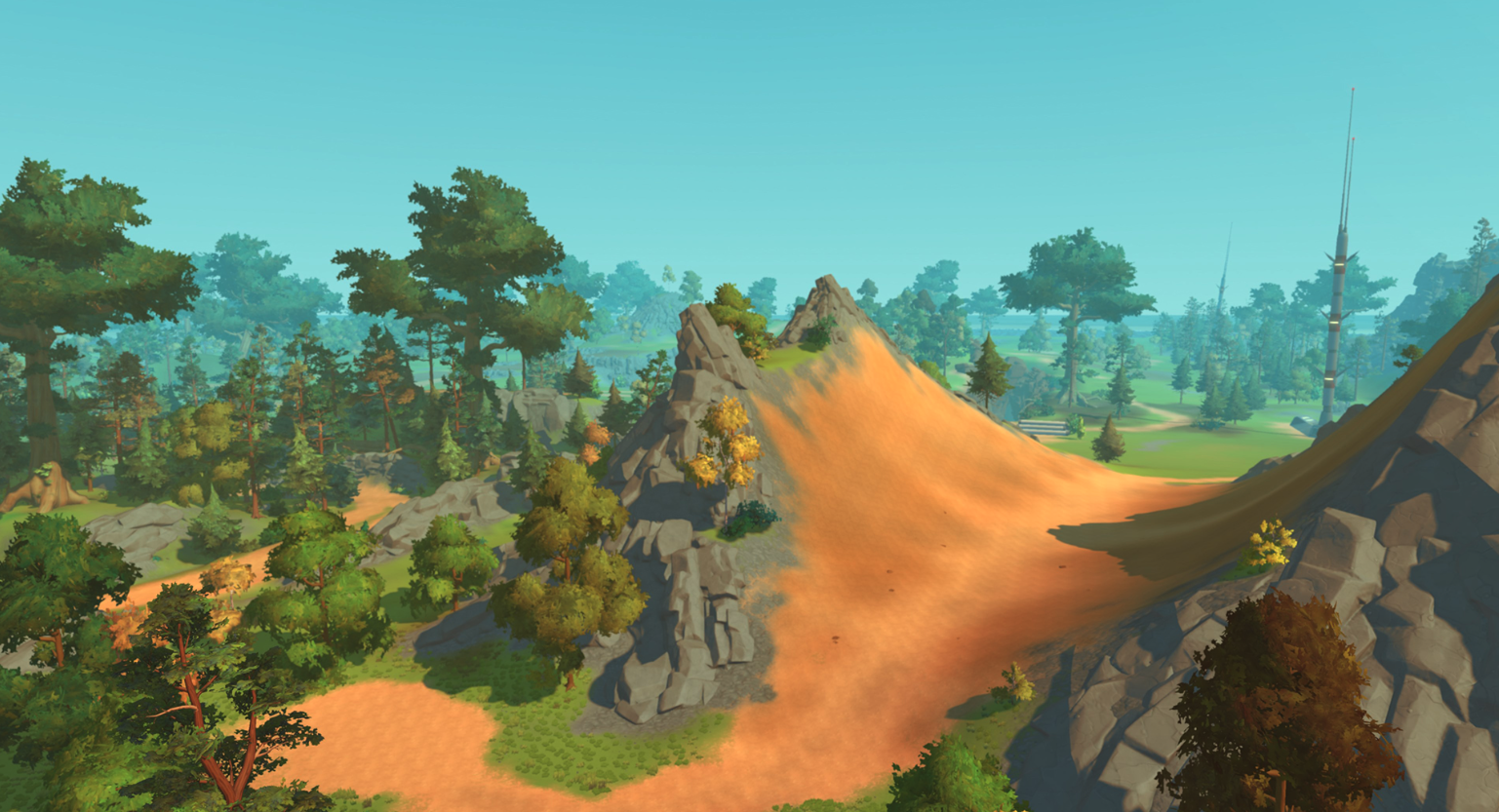 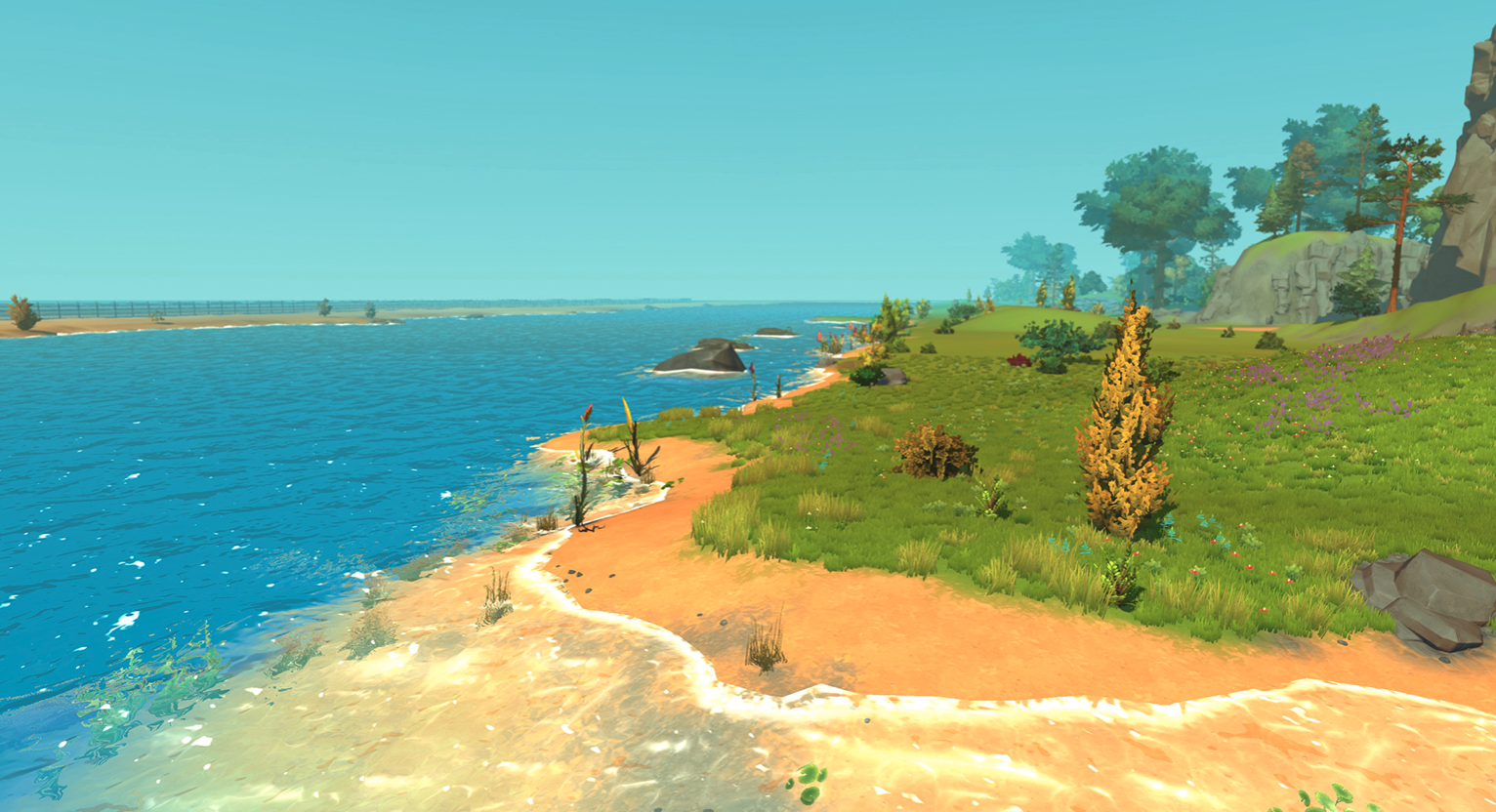 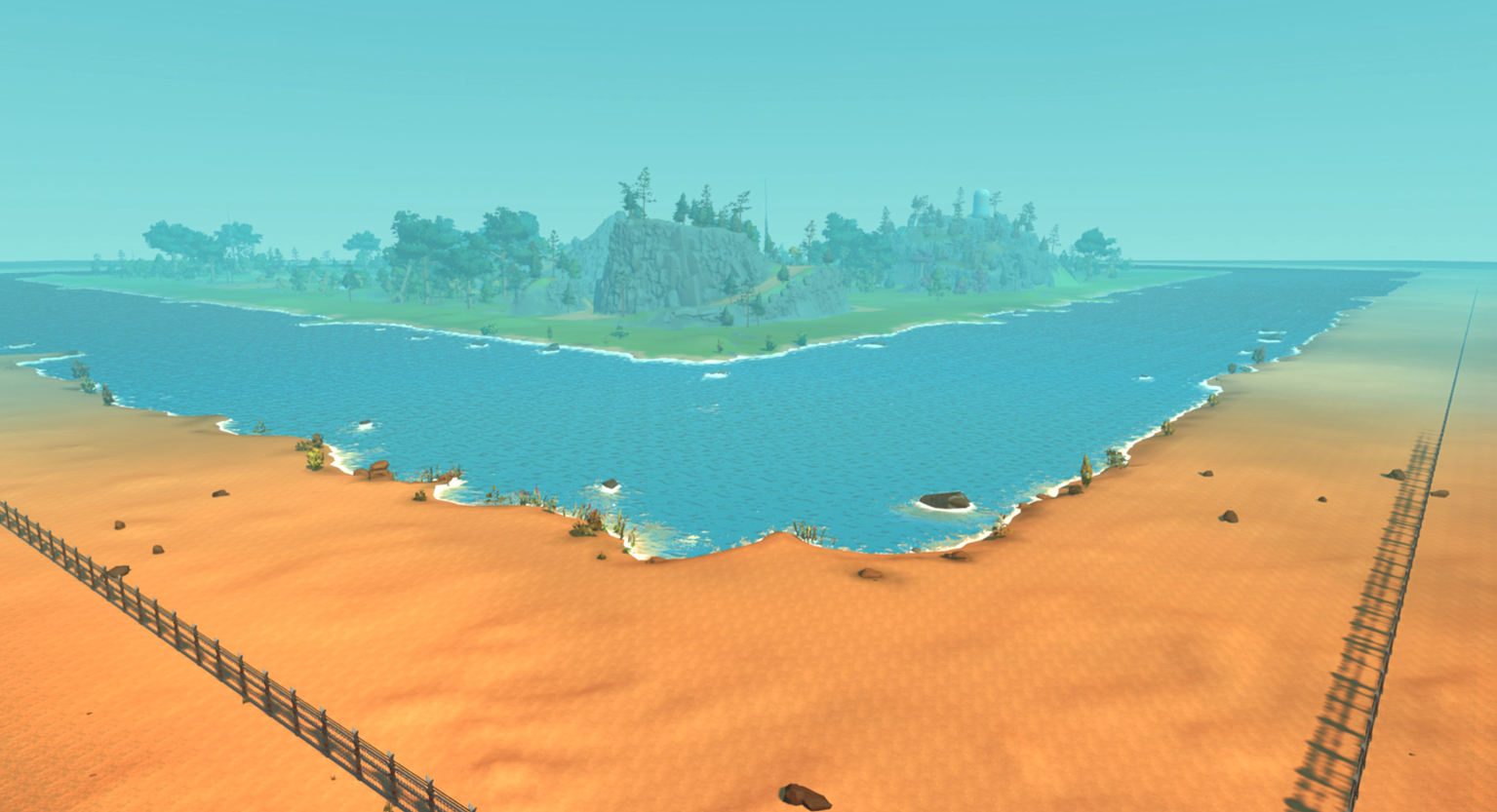 In the Creative Mode update that's just around the corner, we will be updating the terrain to include the same props as the world of Survival Mode. You will now be able to cut down trees and test out new ideas for lumber- or rock drilling-based creations. We also added water to some of the tiles, as well as a water border around the creative terrain world, so you can go on boat races with your friends! We also updated the flat world ground texture, since the old one was a bit out of date against the game's new visuals. We have also slightly increased the map size of both the terrain as well as flat world. You will have to create a new world to get the updated terrain however. The new props and water will not show up in old worlds. 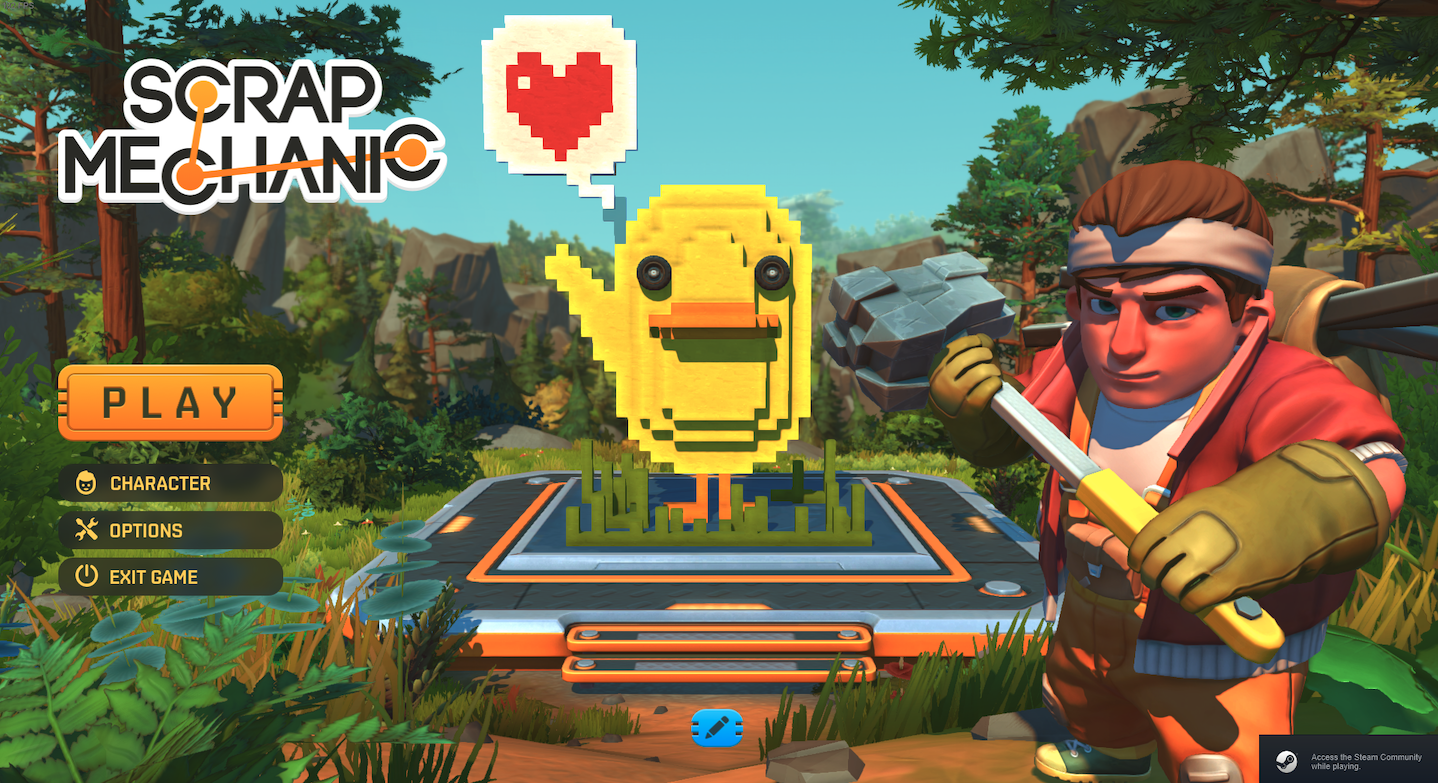 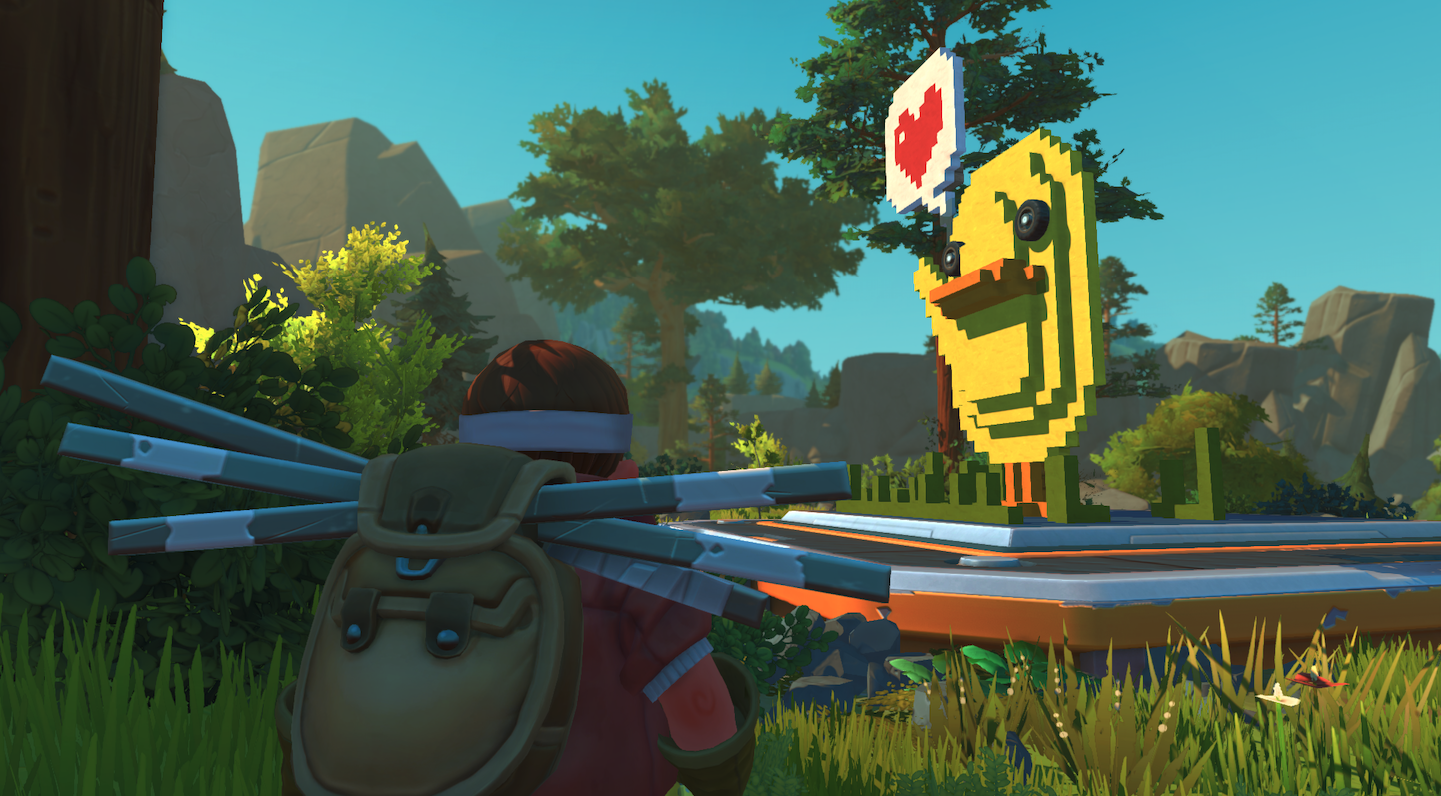 Some mechanics might have been wondering about that odd background platform that is sitting in the middle of the main menu. We're finally putting it to its intended, original use: mechanics will now be able to enter that world so they can build and decorate their main menu, simply by clicking the blue pen icon at the bottom. Let's make some neat pixel art! 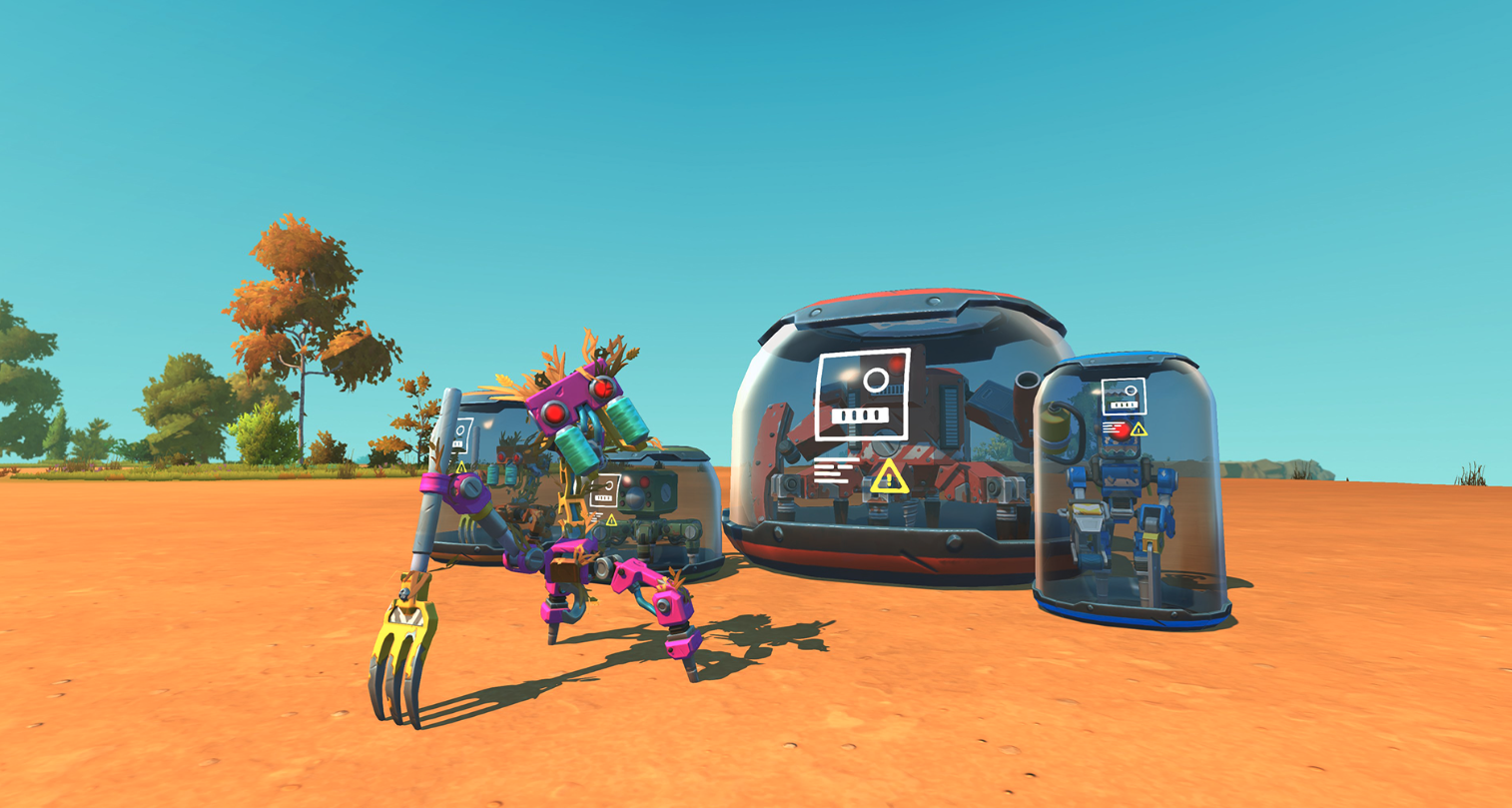 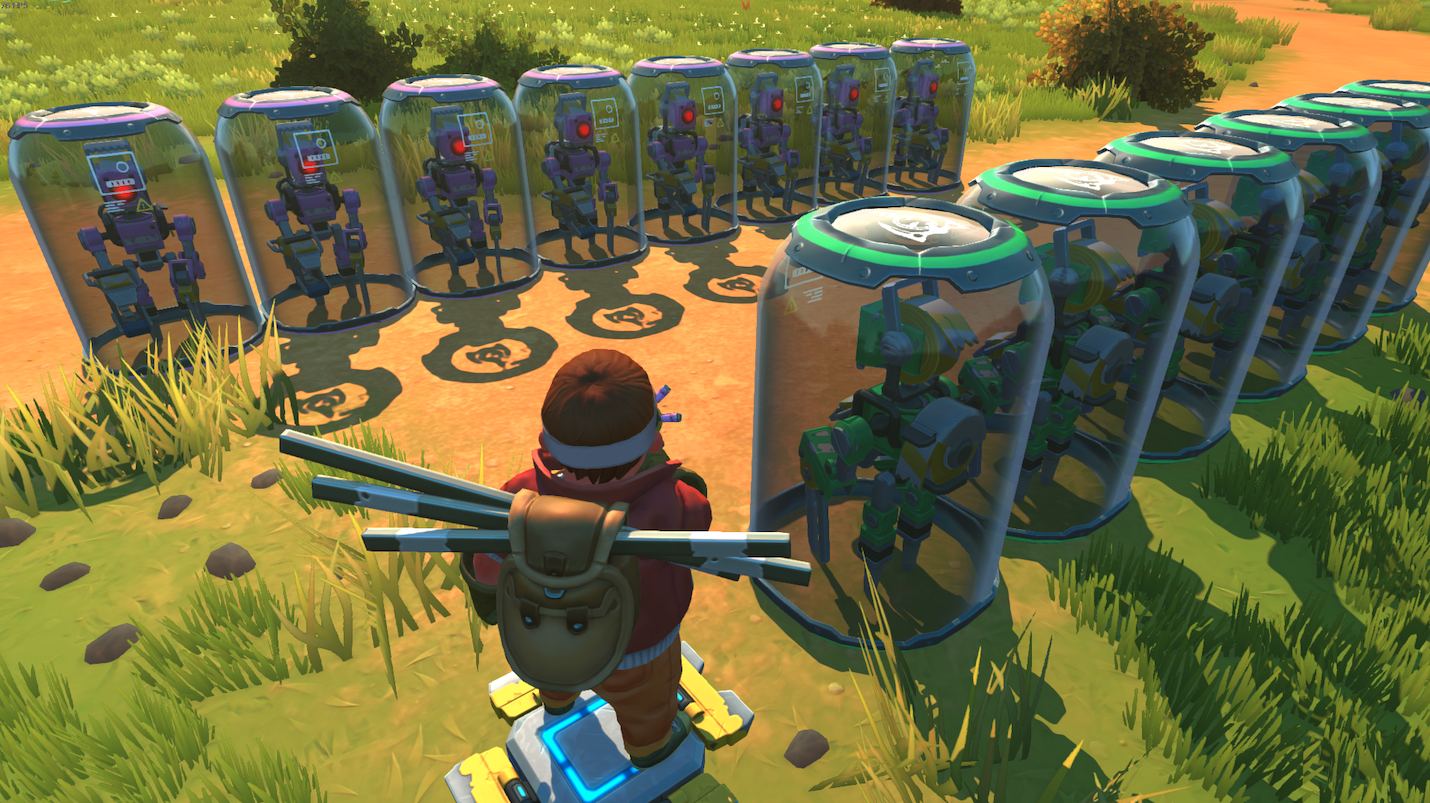 We've only given you sneak peeks at the enemy capsules for creative mode on our Twitter so here's another good look at them in action. Use them to test your new traps and defenses against bots before your next survival mode session. But that's not all; we're also working on adding another feature to the enemy capsules: paint jobs. Now, you can paint bots in different colors, so they turn on each other instead. For example: if you spawn two tape bots and paint one yellow and the other pink, they'll duke it out instead of coming after you! Lastly! Woc's and glowbugs will also get a capsule. The capsules will come with the new creative mode update. 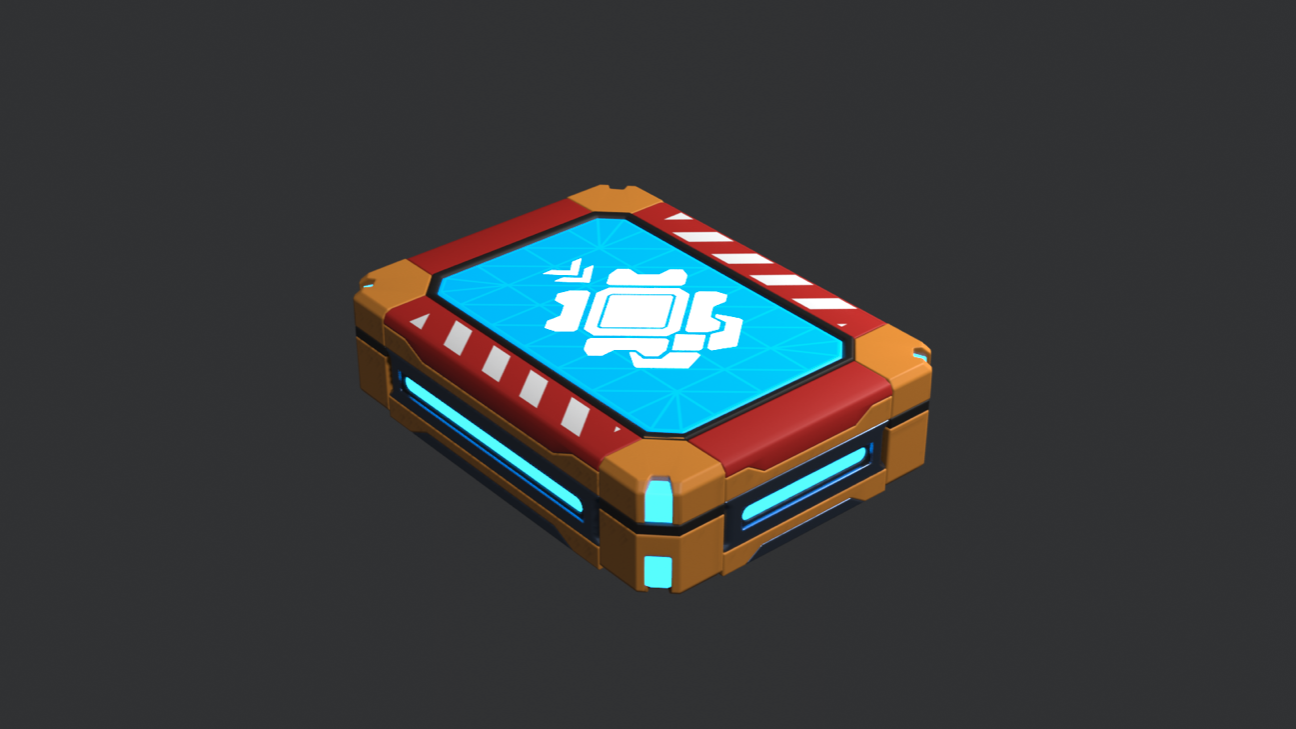 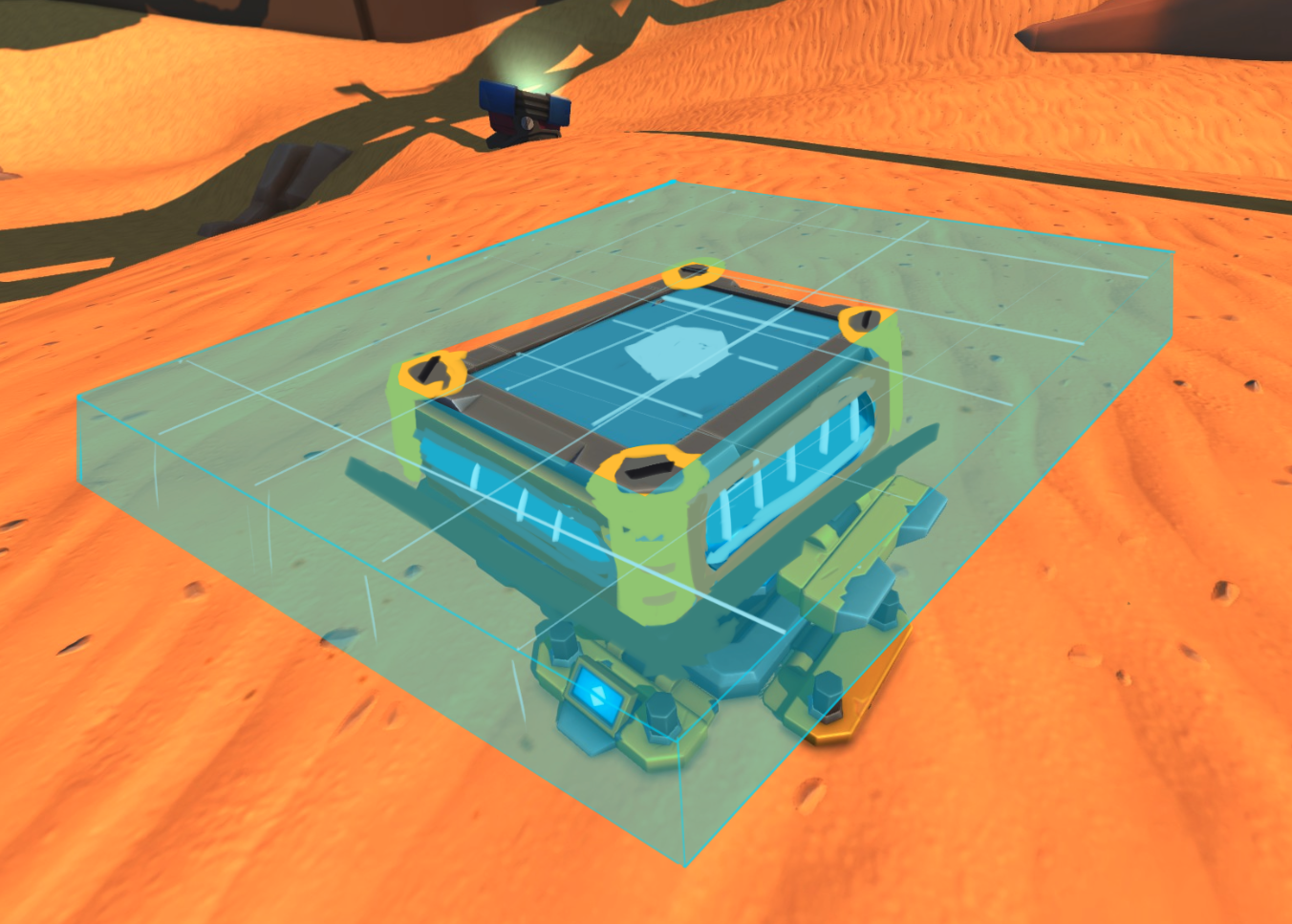 Calling all new mechanics! Learning how to build a vehicle the first time you start the game can be a bit hard, especially when you've got nothing but the handbook. The new tutorial block is here to help you flatten that learning curve! Now, you can get step by step instructions on how to build a basic vehicle and grasp the game's building fundamentals, simply by placing it on a lift. We are still not sure if this one will come out before or with the next chapter.

That's all for now!

We have some truly cool stuff in the works that we will show in devblog 22, so please keep an eye out for it. It's something we know a lot of you mechanics will love.