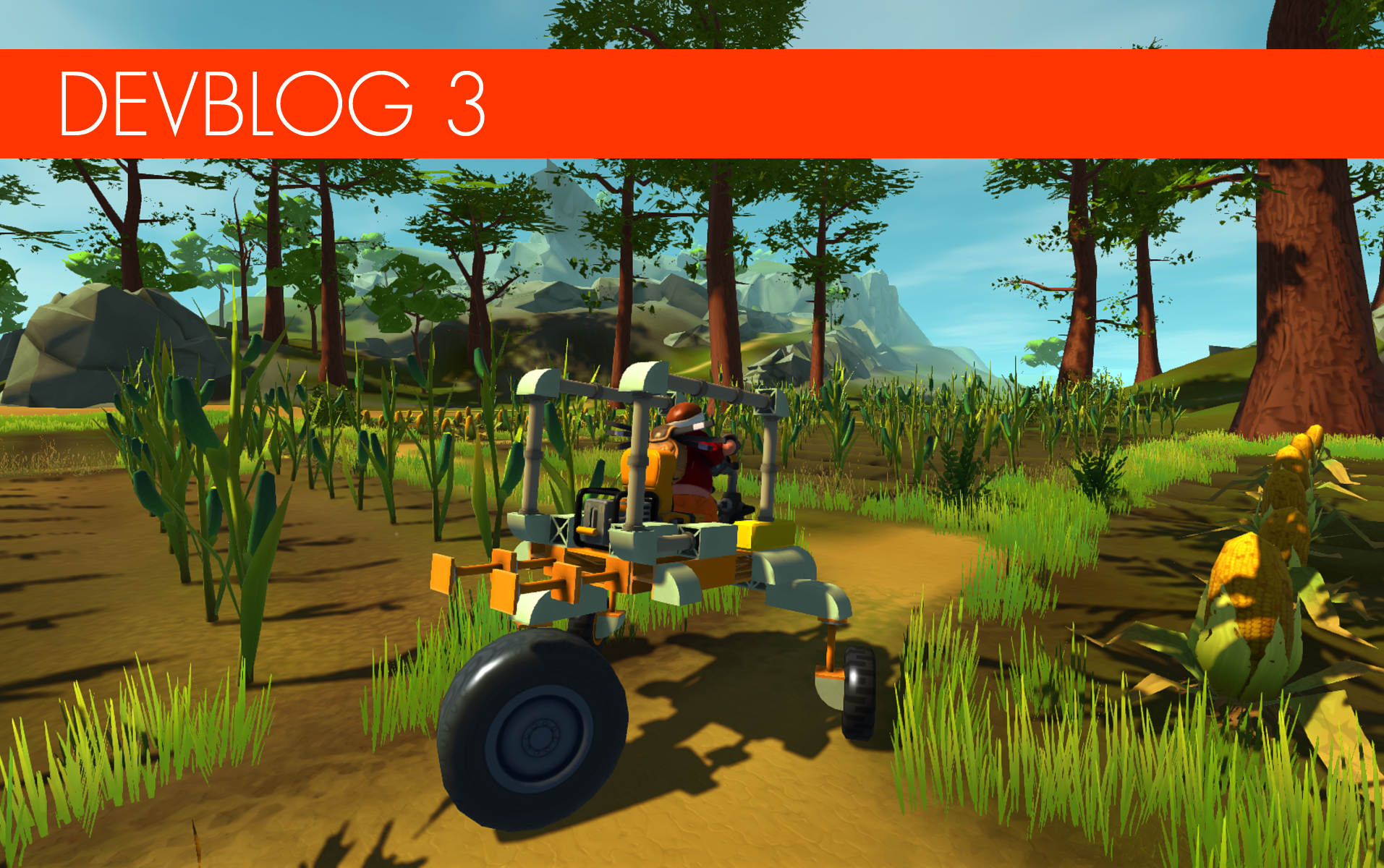 As with so many of the best things life has to offer, we at Scrap Mechanic HQ find ourselves tired and satisfied after a prolonged period of some considerable exertion.

By that, we of course mean we've had an incredibly busy month where we totally took care of business - and we've got about four hundred metric tons of awesome to share with you! 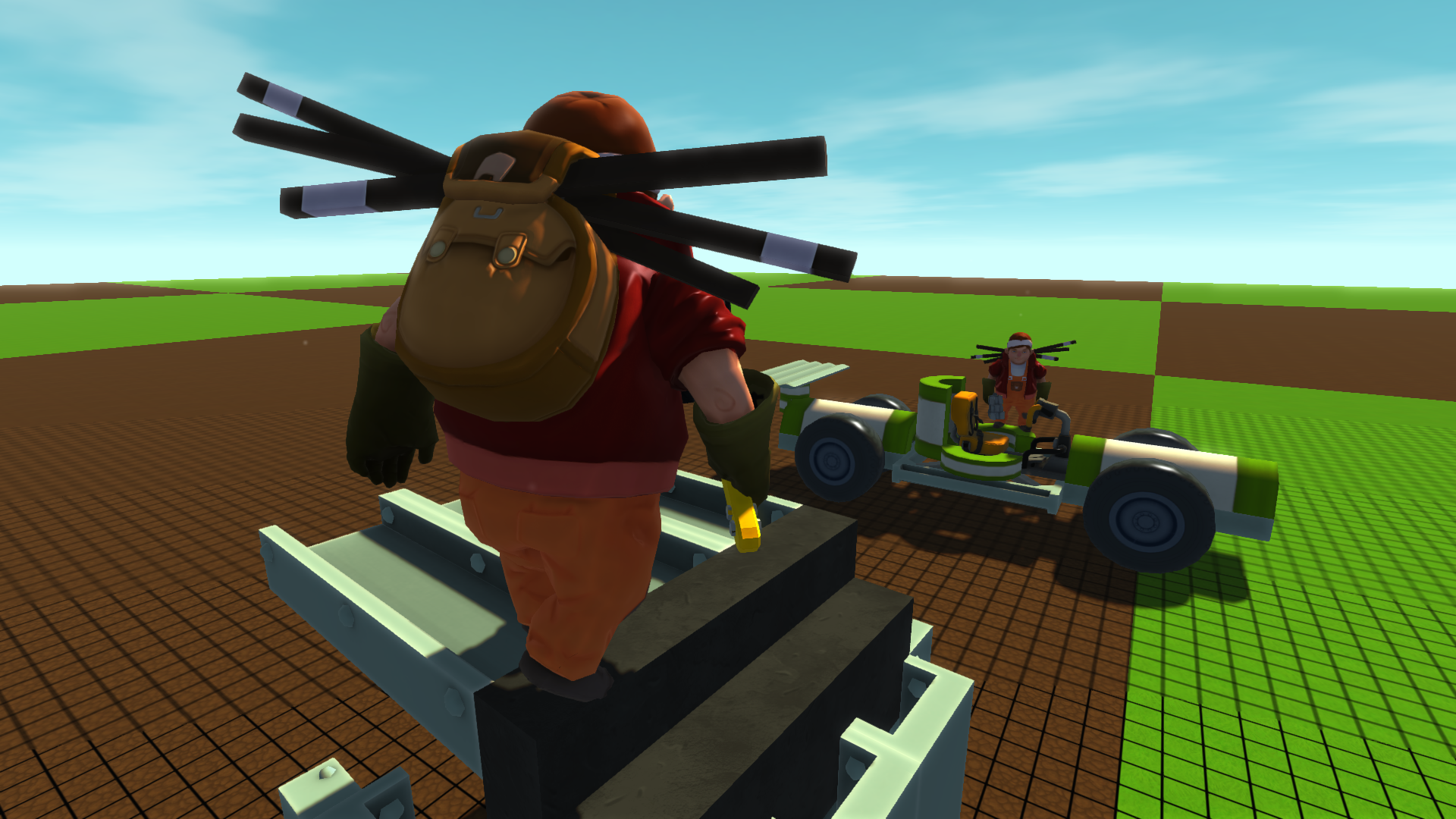 Time for an update on the multiplayer! It's now possible to build things with physics, and it actually runs just great. We've just spent the whole day building vehicles and we're seriously chuffed to bits over how fun it is to play now. 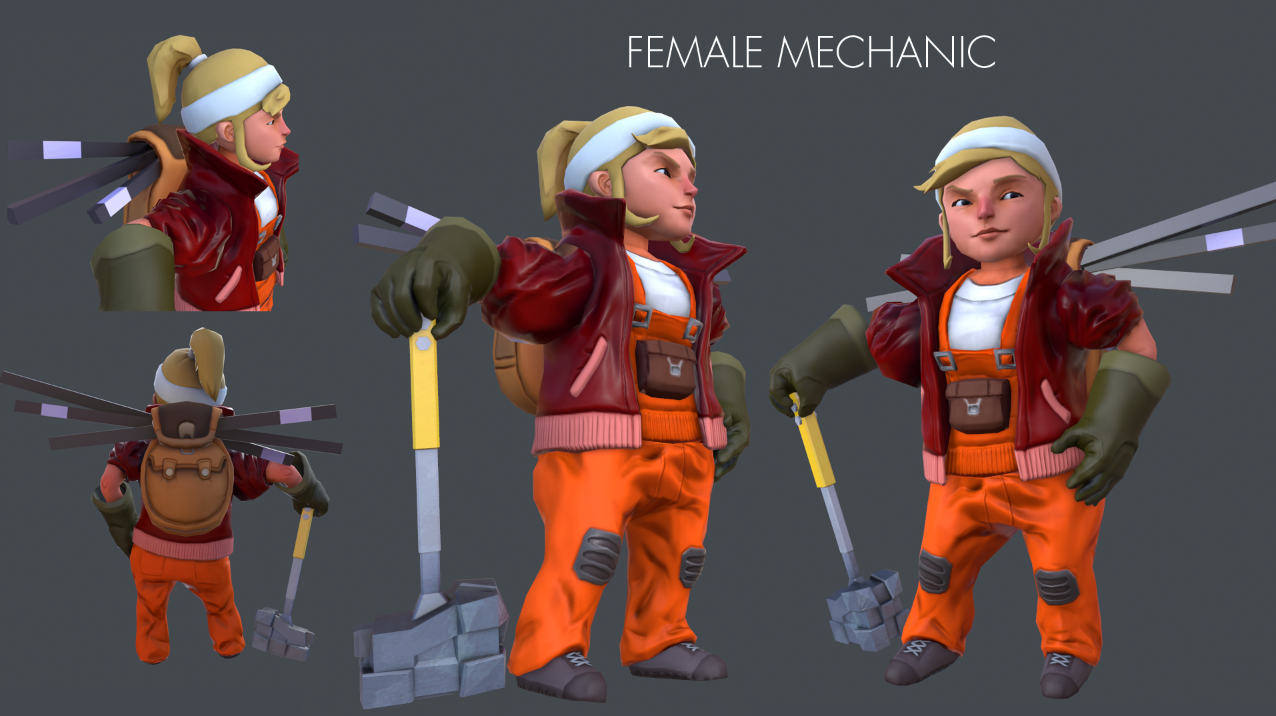 Remember in our first devblog when we said we were working on a secret? Time to uncover the mystery! For a while now, we've been working on modeling a female mechanic! We're happy to announce that you're now able to play as a male or female. We're a little bit stuck on a name for our new Mechanic Maiden - maybe you have some suggestions for us? Let us know on Facebook or Twitter! We also started working on her animation. 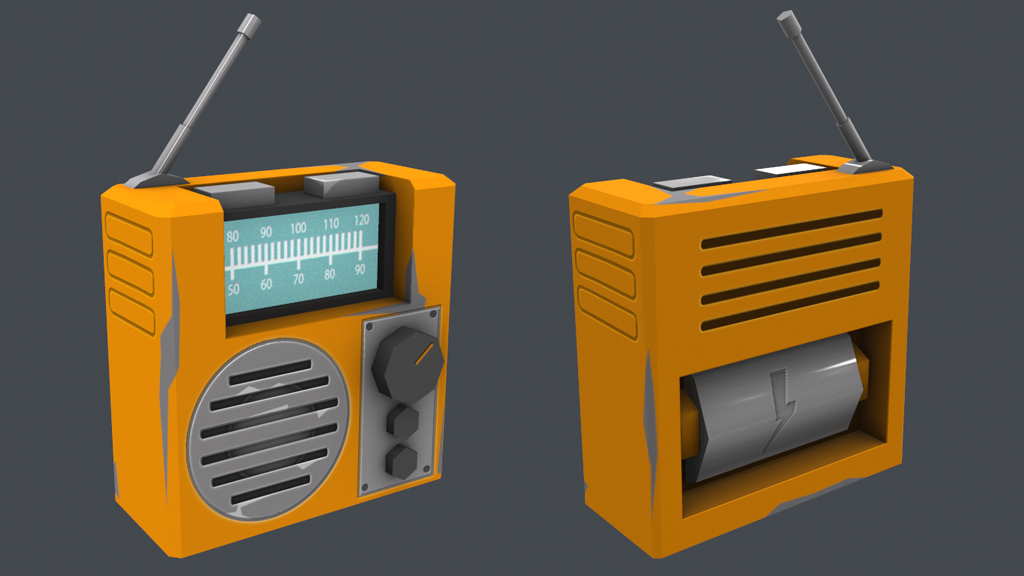 Tune In to Agribot FM!​

Oh no! Those beastly agribots have hijacked the radio station and are now transmitting classic selections from their deeply unusual taste in music. Sadly there's not much we can do about it, but we did add a radio to the game so you can at least have a listen. The speakers aren't that great but it's better then nothing. You can install the radio on your vehicle or just have it beside you as you build. If you don't like the music, don't come crying to us... Maybe you're brave enough to go ask the agribots if they do requests? 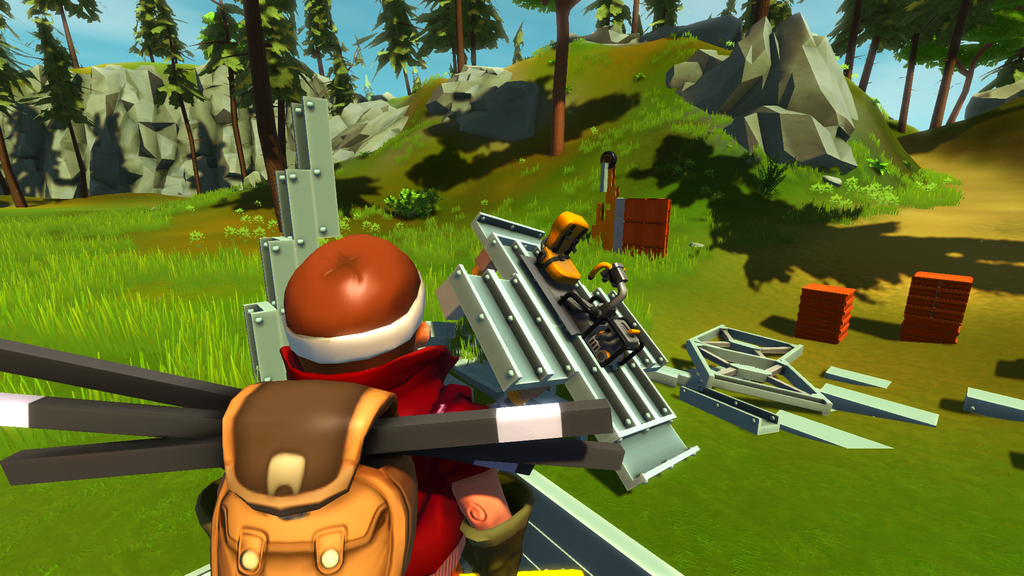 Hey. What's that sound? Did you hear that? Why, it's just the sound of all the scrap colliding with awesome new custom noises, that's all! We've added a whole bunch of sounds to every item in the game so that when it collides with a certain surface (wood, plastic, stone etc.), it makes a satisfying noise. Not only do your creations act with physics, but now they also act with sound. Now, who's gonna be the first mechanic to build a drum machine on wheels?

For centuries, man has pursued power, wealth, happiness, and - of course - the perfect button. The pursuit of the perfect button began with simple questions... Questions such as "what material should make up the button?" and "what kind of paint should adorn the button's sweet, sweet face?" Then Robin happened. Robin is a button manufacturer extraordinaire and he answered those questions with the grace and confidence of a terrific eagle of some kind. He made the button irresistibly round and a joy to punch, and gave it the near-mythical capability of turning stuff on. And/or off. We've also fixed it so that when you have something connected to buttons on your vehicle, you're able to access all the buttons on the hotbar while driving. This makes it incredibly easy to dazzle and excite your friend or friends with the sweet convertible ride you just built. 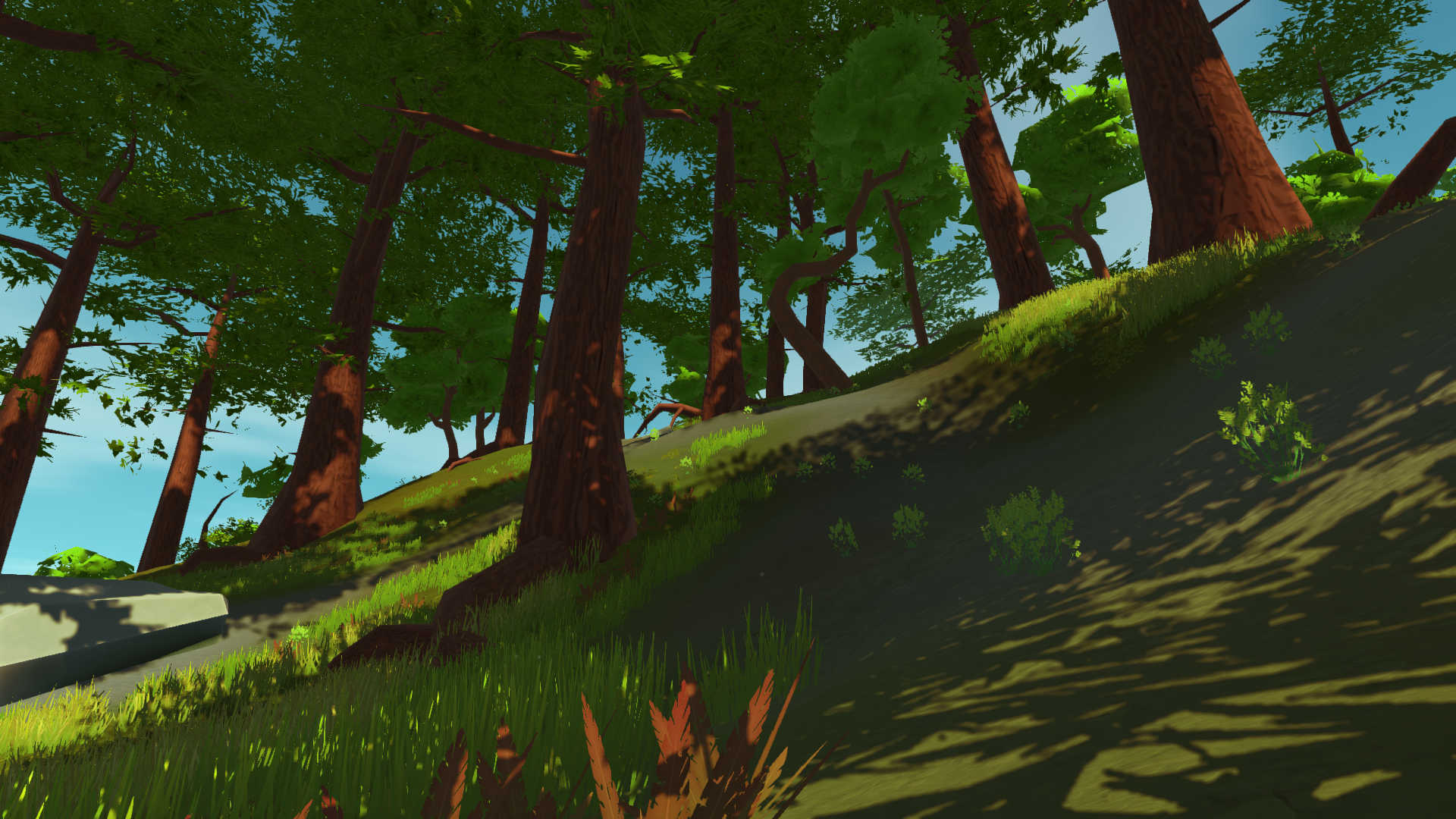 The team here at Scrap Mechanic HQ loves endless, dense, lush forests to explore and get lost in. If you don't share our arboreal enthusiasm, you'll be horrified to learn that we've added some brand new humungous trees to the game. Inspired by the majesty of the Giant Redwood, you'll be feeling like one humble little mechanic standing next to these bad boys, but don't worry! You can just compensate by building something massive and robust to make you feel less like you're having a bit of an existential crisis. 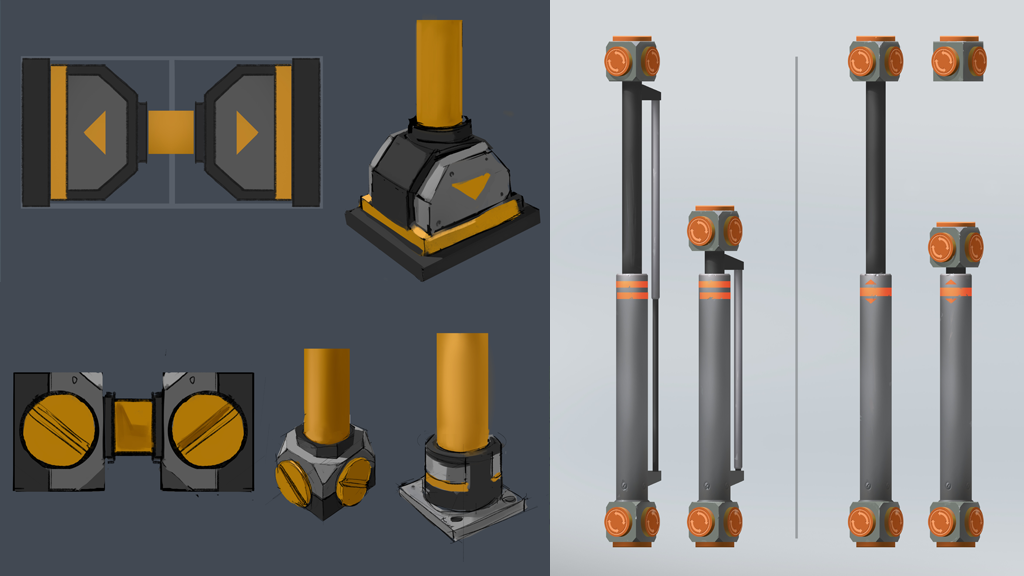 We've been working on creating a usable piston in a couple of handy varieties: one with a shorter extension and one a little longer. This is going to make it easy to make nifty sliding doors and fully functional elevators, but also unlocks the magic of a cruel and unusual super-sport: Stuff Poking. Attach the piston to your vehicle and - from a convenient distance and at a mere keystroke - poke stuff off cliffs. Stuff that has been made by your friend or friends. Just poke it. Poke it right off a cliff and gleefully observe the ensuing dismay.

Yeah guys, this all sounds great but when can I play the game?!​

Lots of you future mechanics have been in touch by mail, on Facebook and through Twitter to ask us about a our early access release date (...keep that stuff up by the way, we love to hear from you and your enthusiasm is making grown developers weep tears of the purest joy. Thanks!).

The best answer we've got for you right now is we're aiming for later in 2015. We believe that unless good value can be guaranteed to the player, a developer should not yet release on early access. Even though Scrap Mechanic is a whole heap of fun to play in creative mode right now, there are a few things we want to add that we think are going to make it even better. Be sure to follow us on Facebook and Twitter to stay ahead of the game and get all our updates and release plans first! In the meantime, Robin has unleashed another of his talents and presents you with this expertly baked Scrap Mechanic muffin to reward you for your patience as we work to produce something we're proud of and that you'll hopefully love. 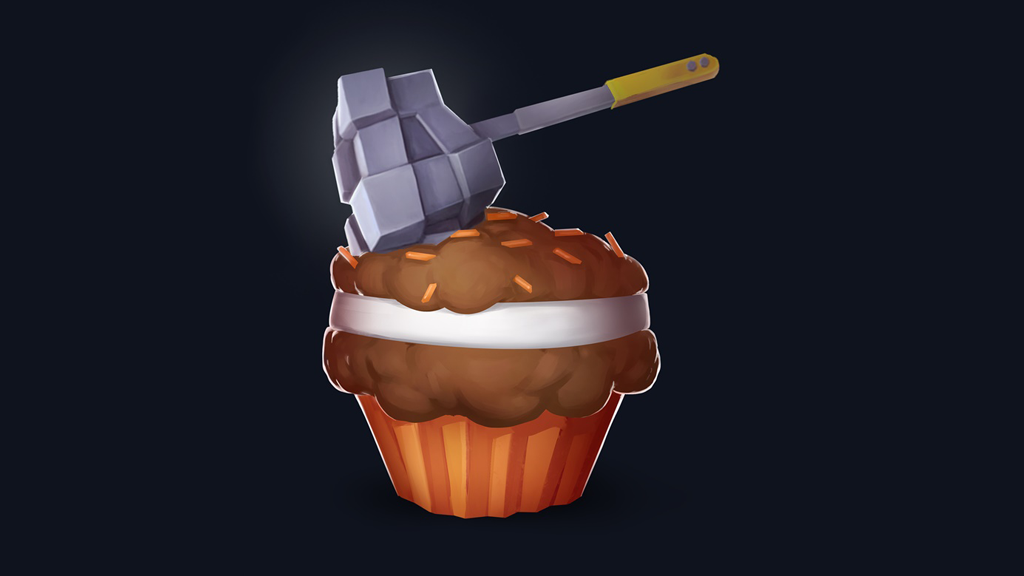