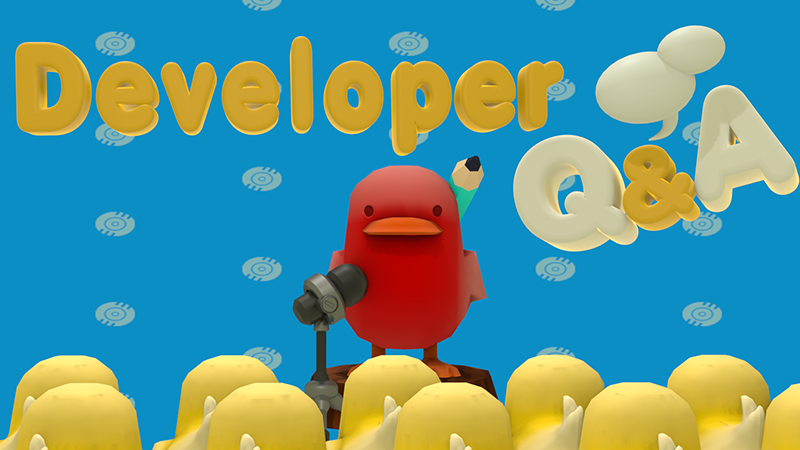 We have collected and answered a lot of your questions! The idea of this Q&A is to be informative and to not leave you hanging, while we are working on the next chapter. We have focused on your most commonly asked questions, as well as a few fun ones. Let us know if you would like us to do these Q&As from time to time in the comments below.

Story & Next Chapter
Q: When is the next chapter update coming?
A: The honest answer is that we don't know yet. The next chapter is a big, ambitious update with a lot of new locations. New bots to fight. New interactive parts to craft with and new game mechanics. We don't want to commit to a release date just yet. If we did, we would be forced to cut corners later on. It would also stop us from adding new ideas that would make it better if they came up. We will make sure that the update is really fun to play and that it offers a lot of hours of playtime before we release it. It could be later this year or next year. But we are working on it as fast as we can, without cutting back on quality. A rough guess would be that we are 50% done. We will keep making dev blogs to keep you updated on our progress.
Q: Will the scrapyard biome shown in some screenshots and concept art be added in a future update, or is it scrapped?
A: The scrapyard biome shown in Devblog 13 is not really scrapped, but it is put on hold for now. The reason is that we took the story in a more interesting direction and the scrapyard didn't really fit as the next location. However, it might be included in a later update. We still have a lot of really great ideas for the scrapyard setting.
Q: Will the next chapter bring an "end goal"?
A: The next chapter will, for the first time, introduce a lot more story elements to Survival. The end of chapter will definitely answer a lot of questions. So yes, there is an end goal.
Q: How many chapters are you planning on releasing and is there going to be a Scrap Mechanic 2?
A: We don't think there will be a Scrap Mechanic 2. Mainly because there is still so much we can add to Scrap Mechanic now, when it comes to chapters. As long as a lot of players are playing Scrap Mechanic, we will keep adding to it.

Scrap Mechanic's development
Q: How did you come up with the idea for the game?
A: It all started with Minecraft; at first, we were pitching a Minecraft port for the Xbox360 to our friends at Mojang back in 2011 but we never ended up partnering with them. So we decided to work on our own game within the sandbox/survival genre. Back then, we always felt like you couldn't really do much with the things you built in Minecraft. So we wanted to make a game where you create machines that have motion and physics. Creations that can solve problems within a game world. That's how it started.
Q: How many devs are working full-time on this game?
A: When we released Scrap Mechanic on Steam in 2016, we were a 3-person team. Today, the Scrap mechanic team is made up of 12 people that are working full time, not including freelance help.
Q: What was the biggest problem y'all had in the beginnings of SM?
A: It was probably the bugs that popped up when we released Scrap Mechanic. We didn't expect the game to become a number 1 global top-seller on Steam when we hit the release button. We were overwhelmed with bug reports and requests from all the new players. It was a stressful time, but a happy one.
Q: When will you finally finish the game? It's been a year since Survival released and not even the second chapter is out holy crap!
A: Great question! Scrap Mechanic has been in development since late 2011 when we started and released on Steam in 2016. This might sound like a crazy long time, but when we started working on Scrap Mechanic, game engines like Unity were mainly used for mobile games and Unreal Engine's license cost was too high for us at the time. So we decided to make the game in a free engine, called Ogre Engine. It ended up limiting us a lot during development, so we decided to make our own. During development, we have been working on a Scrap Mechanic and our own game engine at the same time. This has slowed things down a lot. But we are now at a stage where we are really happy with our tools and development is going a lot faster compared to before Survival's release. However, we are working on pretty big updates so it still doesn't mean that they will be dropping at a very fast rate. Good game development still takes a lot of time. Everything has to get designed, iterated, tested, and implemented.
Q: When creating a new big update, how do you make sure, to the best of your ability, that it is going to keep people interested in the game?
A: Well, in the case of the next chapter, we usually aim to introduce a setting where the player can be creative in new ways that were not possible before. Then we try to find a lot of new ideas for interactive parts and progression within that. It's much more complicated than that, but that's how we start.
Q: What was Survival development like? What took so long? Did plans change while making the mode? How is it still in an unfinished state?
A: The thing that took the longest was the work we had to do on our game engine in order to allow us to do everything we wanted. The good news is that we are at a stage now where we are very happy with it. That was mainly the thing slowing the development down. But no more!
Q: Why do people who make mods for this game add new and interesting things much faster?
A: It's because of the awesome Scrap Mechanic community making really great mods. We, however, are a bit limited when adding things to Scrap Mechanic since everything has to fit the theme and have a meaning in the context of the game. We focus more on bigger updates while leaving a lot of space for mod makers to be creative.
Q: Devblog 22 when?
A: Hopefully soon. Right now, we are waiting for a few things to be more presentable. We can, however, say that it will be a pretty exciting devblog. We will show underground digging for the first time!
Q: How come you've been so inactive on Twitter for the past 2 months?
A: Usually when we go silent, it means that we are pretty busy with internal deadlines. But we will take it to heart and try to post more during these times.
Q: Why are you guys so slow with updates compared to most games today?
A: Development used to be very slow before the Survival release. But today, our tools are a lot better and our development is going pretty fast. However, it's hard to see that from the outside since the community does not see the number of things we are working on. Hopefully, the dev blogs will start to make that clearer.

Other questions we just had to answer
Q: How are you doing? Just checking in :)
A: We are doing great! We are busy working on some really cool features for the next chapter. We are definitely not in development hell like we've seen some players think in the community.
Q: Is this Q & A replacing a devblog?
A: No! We will still do dev blogs. This Q&A is just something we have wanted to do since we noticed that there were a bunch of questions sent to us and Twitter is not really a good place to answer the longer ones.
Q: What are your favorite toppings to put on a sandwich?
A: Easy answer! The toppings on a revival baguette!

Thanks for all the great questions!